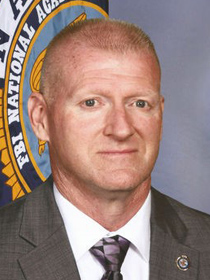 Director Dingfelder has over 30 years of law enforcement experience, supervision and management. Starting his law enforcement career as a Military Police Officer in 1988 in the US Army where he worked different assignments. After leaving the US Army, Director Dingfelder spent 25 years with the Colorado State Patrol where he promoted through the ranks, retiring as a Major (District Commander) overseeing field operations for southwest Colorado, including the San Luis Valley, Durango and Montrose Troops of the Colorado State Patrol.  During his tenure with the Colorado State Patrol, he went on to earn an Associates Degree in Criminal Justice and a Bachelor’s degree in Public Administration from Colorado Mesa University and a Master’s Degree in Criminology with and emphasis in legal studies from Grand Canyon University.

He is a graduate of Northwestern University’s School of Police Staff and Command and the prestigious FBI National Academy.  He currently is the Chief of Police in Monte Vista Colorado.

He currently serves on many local and state boards, including the Peace Officer’s Standards and Training (POST) board, Crime Victim’s Advisory Board, and recently appointed to the Commission on Judicial Performance for the 12th Judicial District.