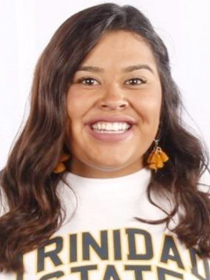 After her two years at Trinidad State, Vigil went on to continue her academic as well as her athletic career at Eastern New Mexico University in Portales, New Mexico. There she received her Bachelor’s degree in University Studies with an emphasis in Business, Health and Physical Education.

A year of working as an Admissions Counselor at Arapahoe community College, Vigil has decided to join us as a Student Support Specialist for the Finish What You Started COSI Grant.