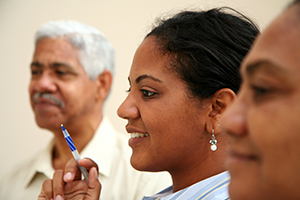 Trinidad State College was established in 1925 and is one of the 13 public community colleges in the Colorado Community College System. Trinidad State’s service area includes two campuses covering eight rural counties in Colorado which are characterized by low population density and small communities. The two campuses are geographically divided by more than a hundred miles and the 14,000 foot Sangre de Cristo mountain range. While the service area covers approximately 14 percent of the land mass in Colorado, it has only about 1.5 percent of the state’s population.

The campus in Trinidad is located fifteen miles north of the Colorado/New Mexico border adjacent to Interstate 25. On the Colorado side of the state line Trinidad State serves Las Animas and Huerfano Counties. A merger with the San Luis Valley Area Vocational School in Alamosa in 1994 broadened the Trinidad State service area by six counties - Alamosa, Conejos, Costilla, Mineral, Rio Grande, and Saguache. This added 8,200 square miles to the college’s service area. According to the 2010 census, the population of the eight counties is 56,263.

Because of the ethnic composition of its service area and its student body, Trinidad State is recognized as a Hispanic Serving Institution (HSI) by the United States Department of Education, Title III – Title V Application.

According to the Chronicle of Higher Education Trinidad State has the best completion rates in the Colorado Community College System.