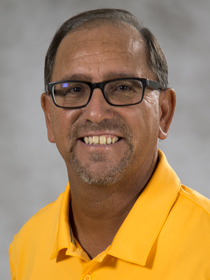 His 2020-21 team secured the school’s third Region 9 Championship along with the conference title and finished the season with a 34-14 record. His team hit 108 HR on the season which puts them second all-time in school history (the 2017 Region 9 Championship team hit a school record 118 HR that year). He sent his third player to a D1 school with Jayden Gandert now playing at the University of Northern Colorado in Greeley.

The 2019-20 season was cut short due to COVID but his team managed to record 13 wins and were undefeated in conference play when the season was cancelled.

His 2018-19 team finished third and his sophomore pitcher Teddi Garcia re-wrote the record books as she left with 307 K’s for her career at TSJC. She also finished second in total wins over a two year period with 38 victories. Another positive was his team finished the year with a grade point average of 3.55 and had a total of 12 student athletes receive Academic All-American status and 17 receive All-Region All-Academic.

His 2017-18 team won its second consecutive Region IX Championship and placed its second athlete to move on to a D1 school in Katie Glaze who will play at the University of Northern Colorado in Greeley. The 2017-18 class had nine of its 11 sophomores move on to a 4-year University to continue their softball careers with either an academic or athletic scholarship. Also most important was this class had an overall GPA of 3.55 as a team and (10) student athletes made NJCAA All-American Academic Honors and (14) made Region IX All-Academic Honors. The students excelled not only on the softball field but also in the classroom.

His 2016-17 team set new records in many categories including winning the Region IX Conference title and also winning the Region IX Championship. Included in the record setting year, Swazo collected his 300th collegiate win. His 2017 squad finished second in the nation in home runs with 118 and Swazo coached his first NJCAA First Team All-American athlete in Isabella Navarro. Navarro was Region IX Player of the Year her sophomore year and was Freshmen of the Year. She leaves Trinidad State as the all-time leader in hits, runs batted in, home runs and batting average and will continue her softball career at Division I Colorado State University in Fort Collins.

So far, a total of 60 former Trinidad State Junior College softball student athletes have played softball and furthered their education at a four-year university.

Prior to Trinidad State Junior College, Swazo, a native of Trinidad, was an assistant baseball coach for Trinidad High School as well as the freshmen boys’ basketball coach. He also worked with special needs students. From 1985 through 2005, Swazo coached in Nebraska and has more than 20 years of coaching high school baseball teams.  He also assisted in coaching clinics with the University of Nebraska at Lincoln, Oklahoma State University, and Northeastern Oklahoma A & M College and was the women’s JV basketball coach for one year at the University of Nebraska at Kearney.

Swazo holds a Bachelor’s of Science Degree in Physical Education and minor in Special Education from the University of Nebraska at Kearney and also a degree in radio broadcasting.

Coach Swazo helps out with many softball camps and showcases during the summer months in Utah, California, New Mexico, Nevada, Alaska and Colorado.