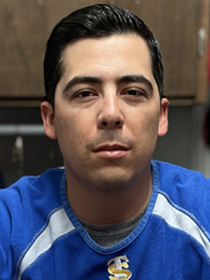 Trinidad State College is pleased to announce the hiring of Jason Veyna as its new Head Baseball Coach. Veyna is a Trojan alum from the class of 2009. He was a standout middle infielder on the 2008 Region 9 championship team and the 2009 Empire Conference championship team, playing for former coach Scott Douglas. He was also an assistant coach for TSC in 2012.

"I am thrilled to have Jason join our staff and to have him lead our baseball program," said Athletic Director Mike Salbato. "He brings great passion and leadership. He is an incredibly hard-working coach and has been successful both as a player and a coach. He will improve our recruiting in Colorado and is already pulling our baseball team closer to the Trinidad community."

"I am excited to lead a program where it all began for me as a player," said Veyna. "Being a Trojan has roots and means a little more to me. Under Scott Douglas I learned a great deal as a player and then later as a coach when I finished my degree while working as a member of the 2012 coaching staff. I'm anxious and honored to work with a supportive Athletic Department ran by Mike Salbato, who's forward thinking when it comes to providing and creating what student-athletes and coaches need to succeed."

Following his playing time in Trinidad, Veyna headed to Georgia College where he played in the NCAA DII world series before returning to Colorado to finish his college career at CSU-Pueblo. Venya played on the first Trinidad Triggers team, hitting the first two home runs in team history.  Most recently, Veyna served as Head Coach for the Regina Red Sox in the Western Canadian Baseball League and at Lamar High School.