The Federal Aviation Administration estimates demand for commercial drone pilots will more than double in the next five years. That’s 350,000 by 2025. This need presents a golden opportunity to those who are interested in this technology and would like to make a living doing it. Starting pay in the United States ranges from $40,000 to $72,000 and can be double that overseas.

Beginning in mid-January, Trinidad State will offer an introductory aviation technology class (AVT160) about flying drones. It’s a perfect fit for the San Luis Valley. In 2015 the FAA approved the San Luis Valley as a designated UAS (Unmanned Aircraft Systems) testing site allowing commercially licensed drone operators and researchers to fly unmanned aircraft up to 15,000 feet rather than the standard 400 feet. Although flying at 15,000 feet is not for beginners, for the more experienced licensed pilot, it can be done (with permission) in the Valley. The Valley was selected as a testing site due to a combination of unique terrains and weather conditions along with agriculture, power lines, solar panels, sand dunes and more. These factors make the Valley an excellent learning base for those interested in piloting drones.

Alamosa County maintains the COA (Certificate of Authorization) issued by the FAA which allows authorized pilots to fly up to 15,000 feet in the Valley. Trinidad State has access to this special waiver.

Dr. Evert Brown, Dean of Instruction for Arts and Sciences at the college, proposed the program to the administration. Brown moved to the valley two years ago from Wyoming where he taught biology at a college there. A licensed UAS pilot, Brown has used drones to do wildlife surveys and forest measurements. He will teach the introductory class in the spring. Those hours will apply to the two-semester, year-long program which begins next fall. The potential exists for transferring to a four-year university program.

The Trinidad State program features a fixed-wing drone made of Styrofoam weighing 2.4 pounds with a 43-inch wingspan. Fixed wing drones can fly longer and collect more data than rotary wing units, making them more suitable for agricultural surveys. Agriculture is a major industry in the San Luis Valley which is nationally known for the potatoes raised here. Barley, wheat, quinoa, canola, lettuce, spinach, and alfalfa are other crops grown in this high desert valley.

Rotary wing drones, most often used by hobbyists, will also be used in class to give the students a well-rounded education. A local hub for drone activity in the Valley is Leach Airport in Center.

Brown said precision agriculture (drone assisted agriculture) is increasing in popularity. He explained that drones can monitor vegetation using infrared technology to take pictures that determine what areas of a farmer’s field need water or fertilizer - even determining what type of fertilizer and how much to apply. A digital memory card contained in the drone collects the data. That card, inserted into a receiver on a tractor with a GPS (global positioning system) automates that process as the farmer drives the tractor to the exact coordinates where the applications are needed. Brown said in Asia drones are being used to apply fertilizer.

Drones are also used to map and to do aerial photography. Real estate agents can get pictures of property from the air indicating a property’s exact location and layout from above. Movie productions often use drones for fly-by scenes. It’s a lot less expensive and less dangerous than a helicopter which has people aboard. Helicopters cannot be flown near power lines or wind generators, but drones can. Inspections can be performed on solar panels and cell phone towers as well.

“A friend of mine just got hired to do pipeline inspections in California and his starting pay is $32/ hr.” said Brown. “EMS services, sheriff offices and police departments can survey an accident scene (or disaster damage) from the air and they can use infrared technology to find a person in a thick forest. Fire departments can survey a fire and find where the fire is hottest in buildings or forest fires,” he added.

The United States does not allow drones to carry materials currently but in Virginia, Amazon.com purchased property to experiment with making deliveries. Drones, which can weigh up to 55 pounds, can drop medications and small packages. This could be lifesaving in remote areas or for victims lost on land or at sea.

If a drone is flown for recreation as a hobby, a license is not needed, but a commercial pilot will have to be at least 16 years of age and pass an FAA exam. “We want responsible use of drones – pilots who understand the rules and regulations and don’t interfere with normal air traffic. Last year someone flew a drone during the Spring Creek fire on La Veta Pass and it shut down air operations for several hours,” said Brown.

In addition to becoming certified to fly, students can complete a certificate at Trinidad State with the addition of GEO 112, Physical Geography – Weather and Climate with Lab, which brings the certificate to a 16-credit hour program. Although spring semester officially begins on Monday January 13, the introductory class (AVT160) will begin on Thursday January 16. The lecture portion of the class meets on Thursdays from 6:30 to 8:30 p.m. Hands-on experience will follow on Friday mornings from 9 to 11:30 a.m. This class prepares a student for the FAA Part 107 Pilot Test. After passing that test a student can then fly drones commercially.

“I think the program we have put together is pretty robust. We have some pretty ambitious ideas about producing pilots that are up for the technologies that are coming,” said Brown. “New uses for drones are appearing weekly. Students will come up with new ideas for this (technology) that you and I have never thought about.”

To register for the program or to inquire about it, contact Dr. Evert Brown. 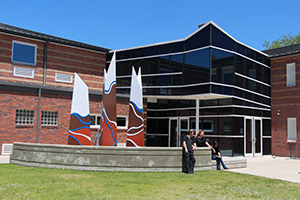