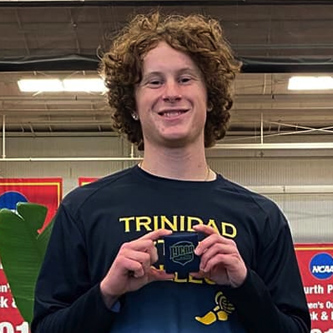 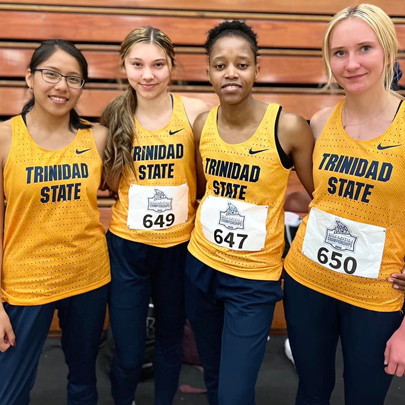 A hot weekend of winter sports for the Trinidad State Trojans got even hotter as the Trojan Track teams graced the indoor oval at the Robert Plaster Center in Pittsburg, Kansas on Friday and Saturday. Both men's and women's squads competed in several events at the NJCAA Indoor Track and Field Championships. The Trojan contingent was the largest the program has ever qualified to an NJCAA Track Championship and did not disappoint in bringing home some accolades and hardware.

On Friday afternoon the quartet of Tamsin Stewart, Kianna Quintana, Holly Tsosie, and Sharon Jesang competed in the Women's Distance Medley Relay. Stewart led the team off well on the 1,200 meter leg of the race. Kianna Quintana ran a great 400 meter leg before handing off to Holly Tsosie who positioned the team well heading into the final leg of the event. Sharon Jesang grabbed the baton and moved the Trojans forward a few spots to finish 10th in the nation in a new school record time of 12:51.11. When asked about the relay Coach Lauren Masterson said, "These ladies did a stellar job. We got great efforts from each of them and though they came up just shy of the podium, we are very proud of what they accomplished by finishing 10th in the country."

Brian Rotich and Jarred Baca took to the track for the men's 5,000 meter race with high goals. Rotich wasted no time placing himself amongst the lead pack of runners before taking the lead with 9 laps to go. The top places revolved all the way to the finish line with Rotich finishing in 7th place with a time of 14:34.55 and earned an All-American finish. Likely more impressive is that an injury suffered during the race hampered Rotich, but he persevered despite the discomfort in his foot. Baca ran his second fastest time at the 5,000 meter distance to finish in 18th place. "We had some strong performances in the 5k's," said Coach Masterson. "Vanessa bided her time and moved up late in the race to snag a personal best time. Brian faced some adversity during his race in an injured foot tendon, but continued to compete for position all the way to the finish." 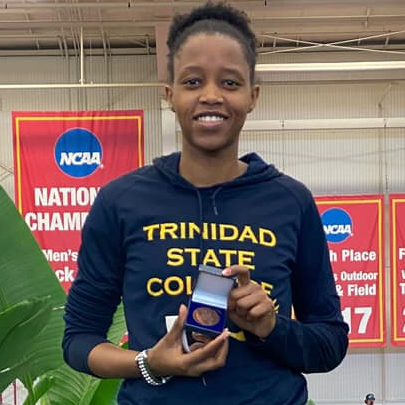 Sharon Jesang was back on the track in her second event later Friday evening to compete in the women's 3,000 meters, alongside her teammates Ashley Lagat and Vanessa Dominguez. Jesang followed a group of 8 ladies for most of the race before the final laps turned into a race for the line. Jesang sprinted past a trio of runners late before holding off some other late charges up the final straightaway. Jesang claimed 6th place in the event, and her 6th All-American honor up to that point. Coach Masterson said of her race, "Sharon has been a consistent force in the top pack of ladies at National Meets the last two years. She knows how to get the job done when it counts, and this race was another example of that." Lagat raced to a 20th place finish in 11:13.12 while Dominguez wasn't far behind in 11:22.13. Jarred Baca returned in the men's 3,000 meters to complete the two longest races of the weekend. He ran a strong race to finish in 22nd place with a time of 8:57.07.

Ethan Coyhis and Adrian Villarreal competed in the preliminary rounds of the Men's 800 meters. Both Trojan athletes competed in the same heat, which got off to a slow and tactical start. Despite both Coyhis and Villarreal running the second half of the race faster than the first half, they came up short of making the final. Coyhis finished in 18th place with a time of 1:56.99. Villarreal was just behind in 19th place overall with a time of 1:57.25. This was a personal best time for Villarreal and his first time running under 2 minutes in the 800 meters.

Conner Dosmann closed off the first day of competition for the Trojans in fantastic fashion. He faced a stacked heat of athletes in the preliminary rounds of the Men's 1,000 meters. After a conservative first 400 meters Dosmann charged to the lead and dared anyone to try to catch him. Only one athlete was able to, which was the national record holder in the event, and Dosmann sealed his spot in the final the next day.

Day two of the NJCAA Indoor Track and Field Championships was even more exciting than day one if you were a Trinidad State Fan. Sharon Jesang took to the track for her third and final event of the weekend in the Women's Mile final. In typical fashion Jesang stalked the leaders through the first half of the race. As the pace sped up in the second half the field spread out and the racing began. Jesang passed and was re-passed by several athletes in the final lap before she made one last push into 6th place to grab her second podium and All-American award of the weekend. Her time of 5:10.75 was only a second off the TSC school record.

Adrian Villarreal was back in action in the Men's Mile final on day two. A blazing fast first 800 meters spread the field out and put everyone into discomfort early on. Villarreal embraced the hot pace and used the momentum to carry him to a personal best time of 4:19.75 and 22nd place finish in the nation.

Conner Dosmann once again closed out the performances for the Trojans in the Men's 1,000 meter final. The race was slow and tactical from the beginning. Dosmann tried to get out and make a push to the front, but was boxed in and couldn't make any moves. When the race finally took off in a sprint to the finish Dosmann made the most of the situation by charging past two athletes in the final 400 meters to finish in 6th place and grab an All-American award. Coach Lauren Masterson praised Dosmann, "That race didn't play out in a way that sets Conner up to perform his best, as everyone has a fast finish when the pace starts slow. But Conner made a rough situation into a great one by closing his final 400 meters in 55 seconds. He competed valiantly and we are very proud of him."

The TSC Track teams will now look to outdoor track season which will be underway in only a few weeks.